Cameras capture and display the world, they are the eye for players, and can be set up in many ways. Cameras can be placed in the world to capture specific points of interest (i.e. security camera), capture and render to UI, or simply be the eye for the player when looking down their gun.

When a new project is created, Core will automatically add a Third Person Camera to the Hierarchy under Game Settings. This will be the default camera which can be modified, or removed.

In the Core Content tab, under Game Components, drag the Camera component into the Scene or Hierarchy.

Press V to enable or disable the camera volume box in the Scene view.

By default, a camera will have the properties Set to Default, Attach to Local Player enabled, and Base Rotation Mode set to Look. If a camera needs to be fixed (i.e. a CCTV camera in a room), the following properties can be changed.

There are various properties that can be adjusted on the Camera that can change the way the player views the game.

Cameras can be positioned and rotated in the world by modifying the Position and Rotation properties.

For the rotation to take effect on a camera, the property Base Rotation Mode needs to be set to Camera under Rotation in the camera properties. Otherwise, the Rotation Offset can be used. 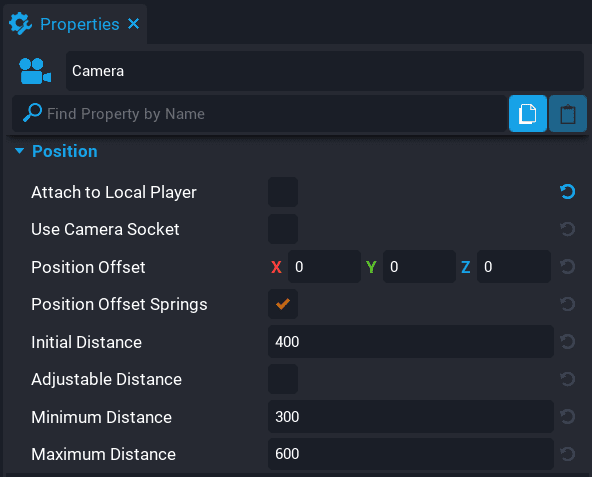 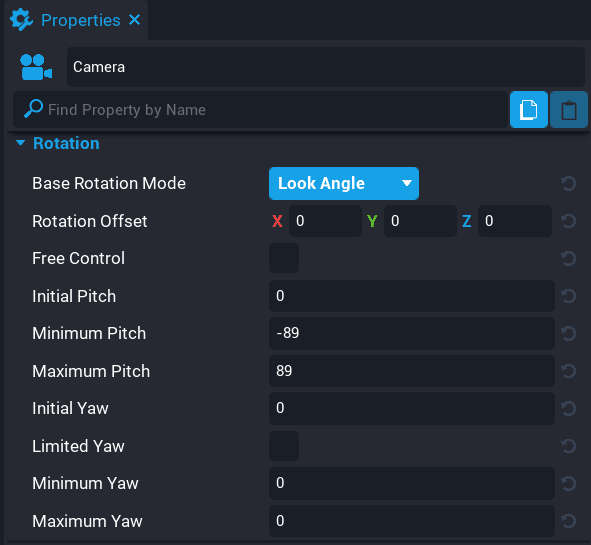 A Camera can be used to override other cameras in the Hierarchy. This can useful for a few reasons, for example, a cinematic shot of the player entering a new area. Or a CCTV camera the player can use to view another area of the map that is under surveillance.

In a Lua script, the SetOverrideCamera function can be used by passing in the Camera as an argument that will be used to override other cameras in the Hierarchy. Clearing an override camera can be done by using the ClearOverrideCamera.

See the Camera API and Player API for more information.

A Camera has the ability capture the view from the camera to an image at different resolutions. These captured images then be used else where, for example, capturing an object in the world and using it as item in a UI inventory system.

To capture images from a camera, the Capture function can be used in a Lua script.

See the Camera API and CameraCapture API for more information.

Core comes with some templates for a few different camera setups for different game genres. These can be found in Camera, under Game Components, in Core Content.

The first person camera shows what a player is looking at from the viewpoint of the player's character. This type of camera can be used in first person shooter (FPS) games. 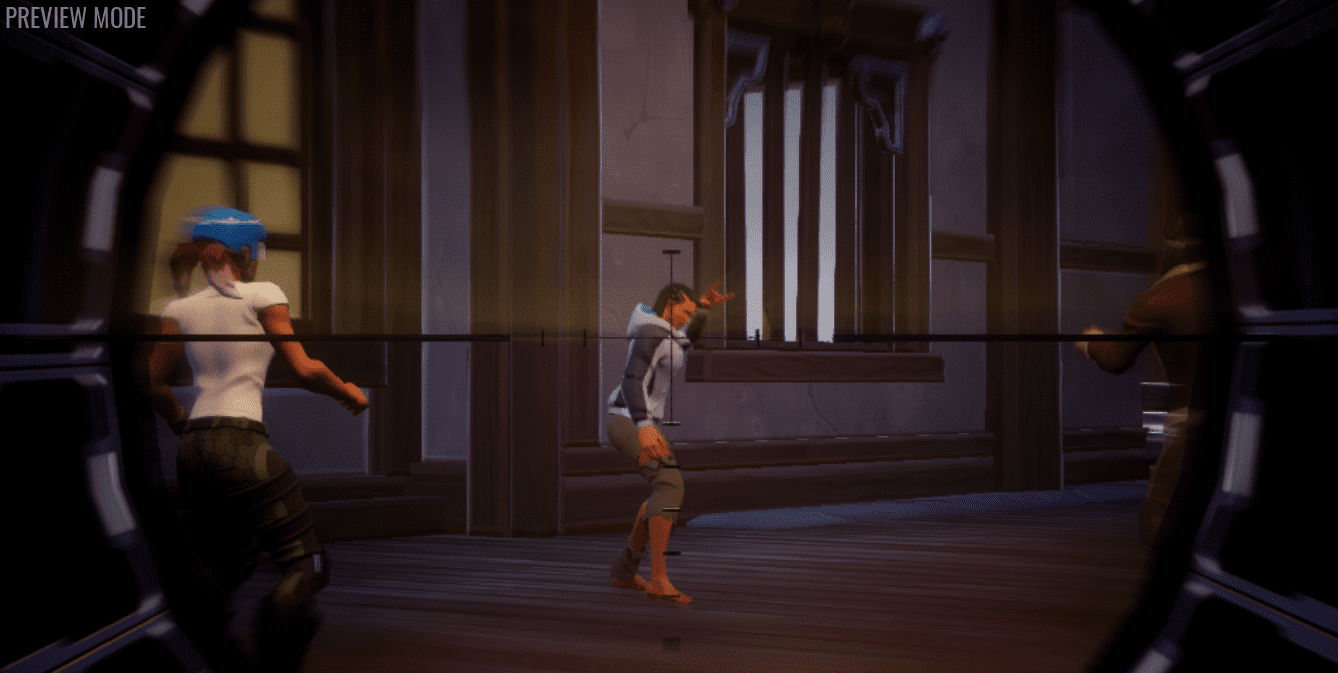 The third person camera view will show the player's character to the player. Sometimes the camera is offset from the character to give it a feeling of appearing over the shoulder. This type of camera can be used in third person shooters (TPS) and adventure games.

The top down camera view will show an overhead view of the game play. This type of camera can be used in real time strategy (RTS), and simulation games.

The isometric camera view is pointed at a fixed angle (i.e. 45 degrees) towards the player's character. This type of camera can be used in real time strategy, and role playing games. 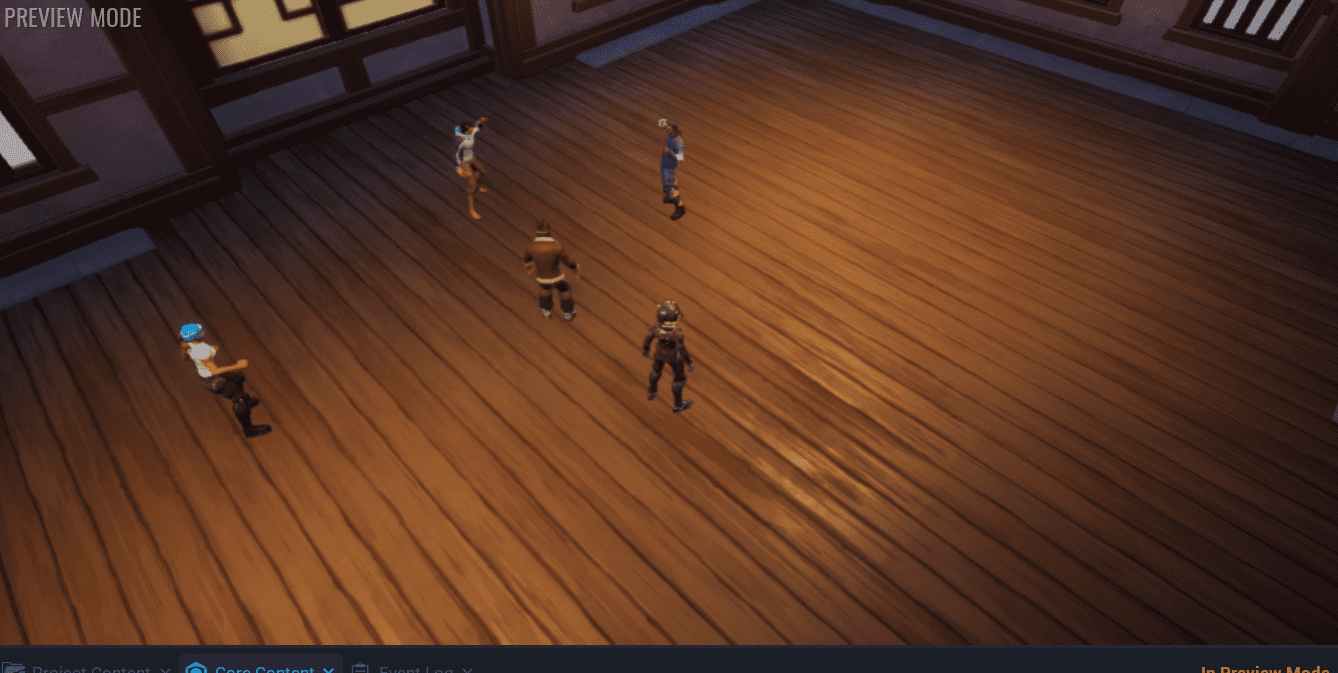 A side scroller camera is a view point from a side view angle, and usually the player's character moves left and right, and the screen scrolls with the character. This type of camera can be used for 2D games. 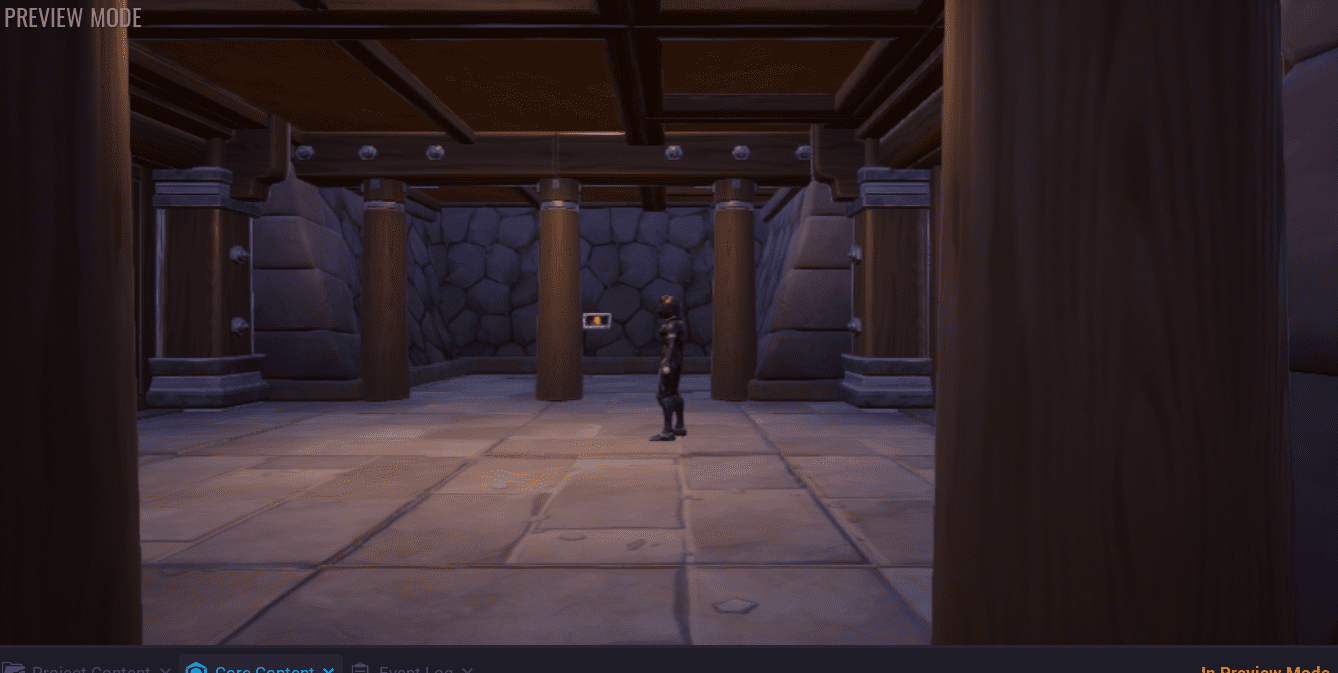 This setting controls where the aim is calculated from. For example, in a third person camera, the aim is usually calculated from the camera view (view relative), but in a side scroller view, the aim would be calculated based on the eye position (look relative) of the player's character.

The Control category in the Properties window has properties to control how the player's character moves and rotates.

Can be used to specify how players control their movement.

Can be used to specify how players control their look direction.

If the option Look at Cursor is selected, then 3 properties will appear after the Look Control Mode property.

In Look Control Mode: Look at Cursor, a cursor position is mapped into the world using this plane.

Distance the cursor plane is offset along the plane's normal.

Can be used to specify what controls a player's facing direction.

In this video, the difference can be seen when moving the player's character around.